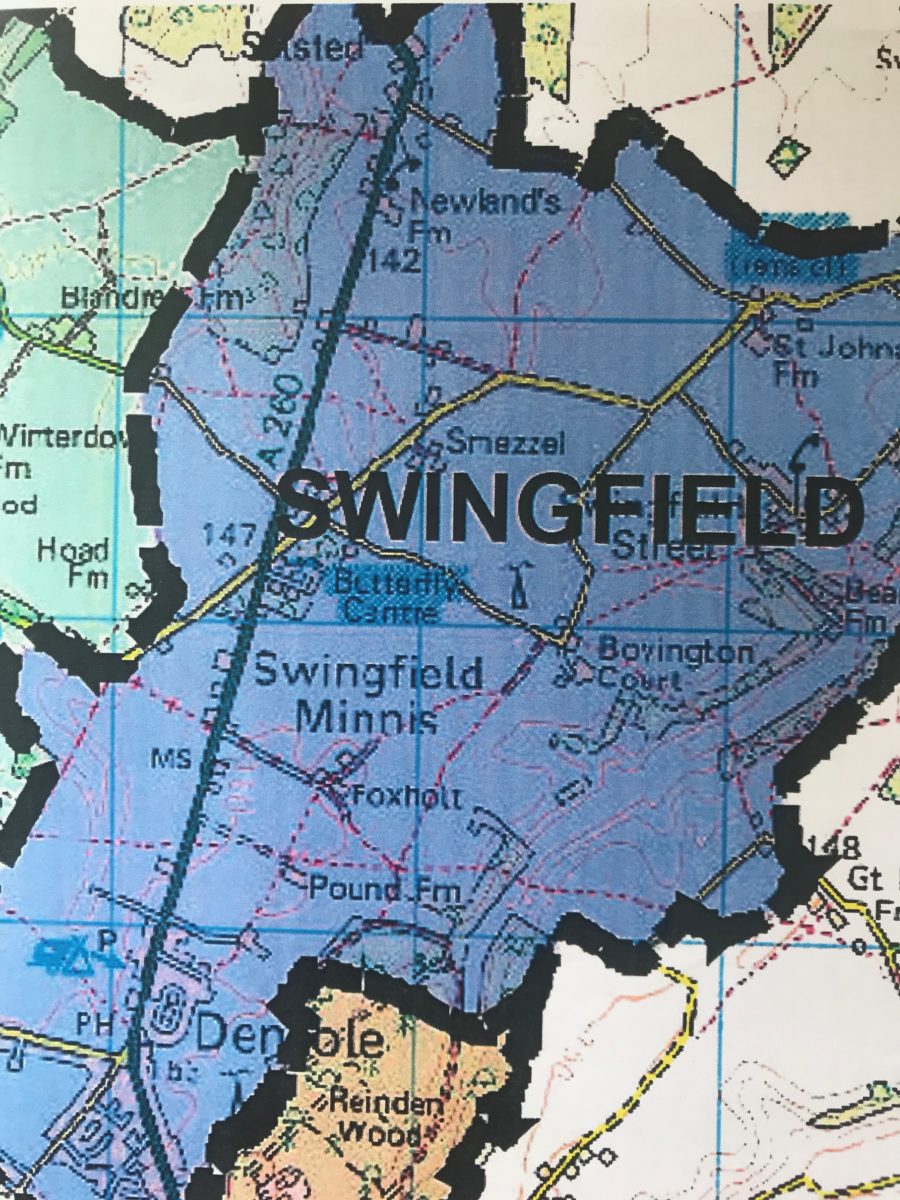 The place-name ‘Swingfield’ is first attested in 1202 in the Curia Regis Rolls, and in 1242 in the Book of Fees, in both instances appearing as Swinesfeld – literally a field for grazing swine. The parish includes the settlements of Densole to the south and Selsted at the northern end.

With a population of around twelve hundred the parish boasts a first class primary school, a post office and well stocked general store together with the very popular Black Horse pub and a thriving Garden Centre. Selsted Primary School is particularly deserving a special mention for regularly topping KCC league tables.

Alas, Swingfield no longer has a functioning Church but St Peters in Swingfield Street now comes under The Church Conservation Trust and is open daily to visitors. Steeped in history it is well worth a visit.

There are several more thriving businesses within the parish, including two very popular touring caravan parks – Black Horse Farm and The Chequers – both sited on the main A260 road ideally located as stop off points for the Channel Tunnel or a visit to our beautiful countryside.

Scroll down to see more about Swingfield Parish.

St Peter’s Church in the centre of Swingfield Street has an impressive thirteenth-century tower dominating this medieval building. The church had close links with the Knights Hospitallers whose Commandery still stands close by across the fields.

Dating back mainly to the 13th century and possibly earlier, the church is constructed of knapped flint typical of the area. Alterations were made in the 15th century with restoration in 1870. Declared redundant in August 2000, it was vested with the Churches Conservation Trust in 2011. The Parish Council acquired  responsibility for the maintenance of the churchyard in 2017.

However, St Peter’s still has a beating heart. The Swingfield Street Community Group regularly use the church to hold a goodly number of events including the popular theatrical productions. 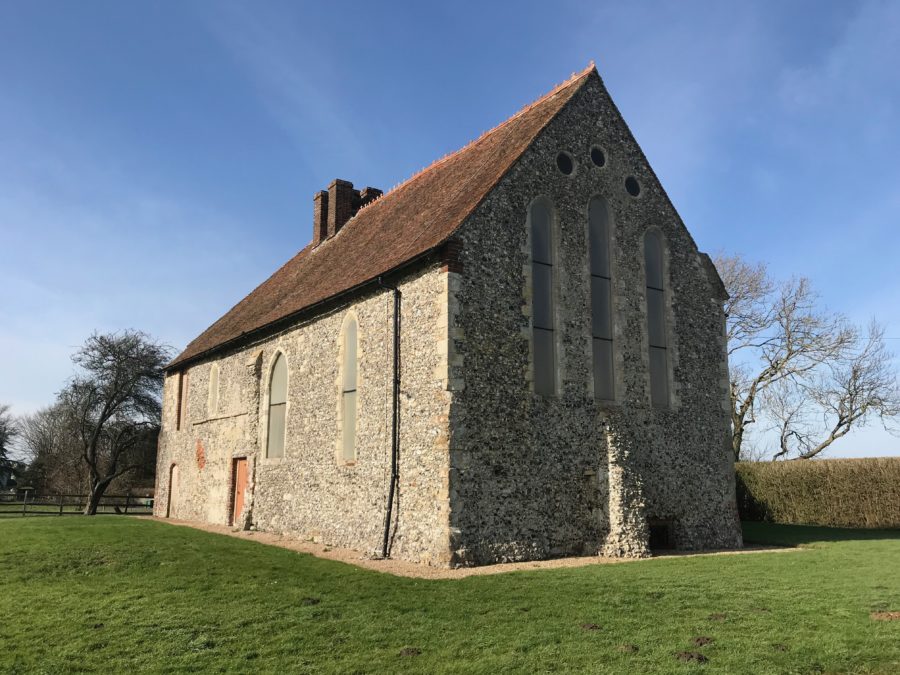 Built in the 13th-century the Commandery was a chapel and hall for Knights Hospitallers, a military and religious order founded in the 12th century for the purpose of caring for pilgrims to the Holy Land.

Built on the site of an earlier nunnery the Hospitallers founded a religious community here in 1180. The chapel is all that now remains. Knights and sergeants lived here together under the rule of a commander whose role it was to administer the Order’s estates, the revenues of which funded hospitals for sick pilgrims.

After the Dissolution of the Monasteries, in 1540 the chapel was converted into a farmhouse and underwent successive phases of alteration. Near the junction of Swanton Lane and Stockham Lane the Commandery is now in the care of English Heritage. 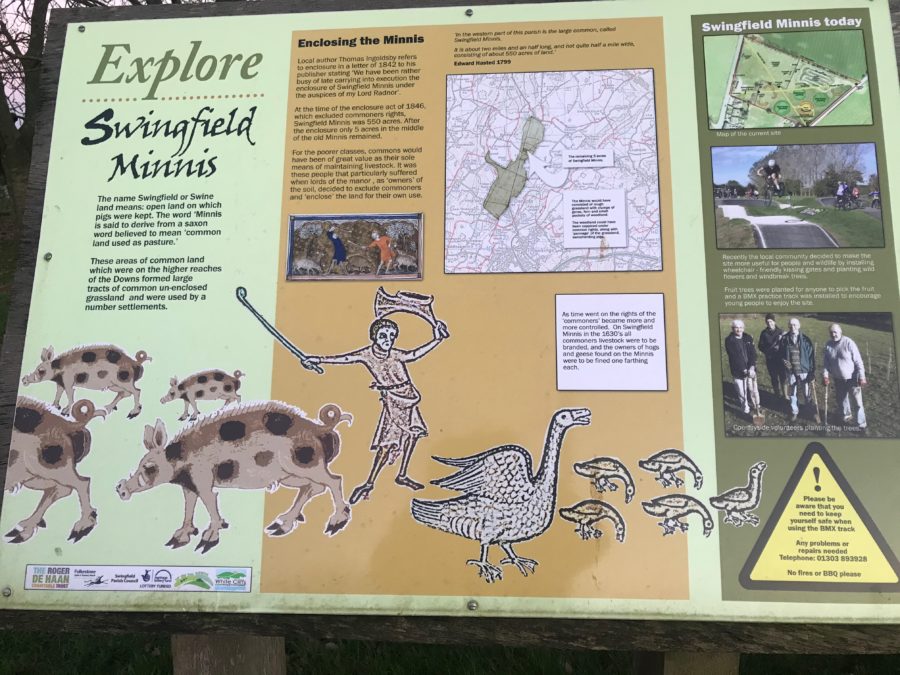 Before the 1846 Enclosure Act some 550 acres of common land stretched from Selsted to Pay Street, broadly straddling what is now the A260 road. On this unenclosed area of grassland and coppice “commoners” freely grazed livestock and collected firewood. The name Swingfield derives from Swine that grazed the common and Minnis from a Saxon word meaning common land. The area that remained, following the Enclosure Act, was but five acres, which the public can still enjoy today.

Some six years ago the Parish Council obtained outside funding to build a BMX track in the southern corner of the Minnis and to further return much of the area to an informal wildlife haven. Both these ventures have proved an outstanding success. Building on this the Council have now embarked on an ambitious tree planting scheme intended to create a small wood. Work is currently going on apace!

Reinden Wood, lying on the southern border of the parish, is well worth a visit at any time of the year. Access to this 200 acre site can be gained from the car park entrance on the A260 at Densole. Comprised of mixed deciduous and coniferous trees there is still plenty of evidence of its ancient woodland origins.

Reinden is part of MOD Defence Estates and is still used for military training. However, a combination of permissive paths and bridleway provide a two and half mile, mostly surfaced, circular walk. Information boards along the way provide plenty of interest.

During WWII, Reinden Wood was used to site domestic accommodation for the nearby airfield at RAF Hawkinge. All of the wooden buildings have now vanished, leaving only traces of the foundations, but what does still exist are the numerous surface air raid shelters for the site.

If, perhaps, you care to step back into the past then it is worth taking a stroll along the bridleway that leaves Reinden Wood at the top north west corner and runs for half a mile or so to Boyington Court. It is very clear that in previous times this would have been a track more than wide enough for a horse and cart.

Evidence of the age can be gained by the very old hazel that has been coppiced many times in the past and the ancient oaks. At one point a heathy stand of elms are bucking the trend and halfway along there are several wild cherry trees of an unusually great age for this species.